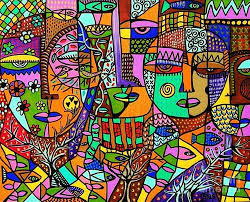 Women, Art, and Empowerment – The Journey

Gaius Plinius Secundus, a Roman writer, in the 1st century claimed that a woman named Dibutandes made the first ever painting. As her lover prepared to travel afar, she traced his silhouette on the wall, to remember him by. But ever since then women, have been struggling to find a place in the traditional narrative of art history. For almost two millennia, after that first painting, women artists, the few of them who could flourish enough to be called that, have been fighting tooth and nail to be recognized and appreciated; sometimes even to be able to claim their creations as their own.

Social structures and customs, and even formal education systems, confined the artistic development only to men, preventing women from honing their talents and gaining entry into the art world. Indulging in arts required time, training, exposure to other artists and centers of art, liberty to travel around the country or the world; all unfathomable privileges for women. For the ones who managed to brave all these, other issues awaited. Like the law prevalent in the U.K. until the late 1800s, which gave the husband, proprietary rights of anything owned or created by his wife.

Then there were other ways to systematically disengage women from the world of art. A lot of arts that women engaged in, over the centuries got classified as crafts. In the words of Carolyn Korsmeyer:

“Artistic creativity increasingly came to be regarded as a kind of personal expression, that externalizes the version of the individual artist in a work of autonomous value; craft, by contrast, aims at some practical use.”

Hence, started the process of strategic channelizing women’s creativity and artistic mettle into ‘decorative arts or crafts’; an indulgence which didn’t need much external training or exposure and also served a useful purpose for the household. The sewing, the knitting, the crocheting, the quilling and the weaving became their fora, while the ‘fine arts’ continued to be a male bastion.

That is, until the Feminist Art Movement of the 1960s and 70s. Though its exact origins are not very well documented, it does owe a lot of the initial thrust to the splitting of a New York group of Women Artists in Revolution from Art Workers Coalition, in protest of unequal representation and privileges.

With Feminist Art, came a new direction; a variant that attached as much importance to meaning and experience as to the form. It experimented with the ideas of gender, identity and form; using performance art, conceptual art, body art, video art and other hitherto unknown or unused formats.

One of the most well known instances of Feminist Art is permanently housed at the Center for Feminist Art at the Brooklyn Museum. The Dinner Party, by artist Judy Chicago, consists of a large banquet table with place settings for thirty-nine notable women from throughout history and mythology. In addition to these thirty-nine, there are 999 names of other women painted on the tiles below the triangular table. This piece aims to revise the history and accord the women artists their rightful place in the sun. Initiated during the 1970s, feminists worked to re-discover and acknowledge, lost role models for women, women’s viewpoints left out of the traditional narratives and art canon dominated by male voices.

More recently, Guerilla Girls, a group of female artists have devoted themselves to fighting sexism and racism in the art world. Formed by merely seven women in the spring of 1985, it has today, a strong worldwide presence. They organize protests, present public speaking engagements and indulge in research on the subject of unfair treatment of women in the arts.

Although, the fight is far from over, but the surge of empowerment the women are gaining through the medium of art is palpable and promising.

This article is written by Radhika Maira Tabrez, the Associate Editor of Incredible Women of India, for the 6th Women Scream Art and Poetry Festival, Kolkata Chapter. To know more about her go to our Know The Team page.

Rhythm Divine Poets in association with Art Fair celebrates the strength of woman on the occasion of woman’s month in March by promoting art and poetry festival in the city of Kolkata. To raise voice against violence on woman is the mutual goal. These associations will lead to Rhythm Divine coordinating Kolkata chapter of the global event called Woman Scream International Poetry and Art Festival on 26th March by Women Poets International Movement (Mujeres Poetas Internacional MPI) from the Dominican Republic, and coordinated by Jael Uribe, MPI’s President.

Online media and literary partner Readomania, Learning and Creativity and Being Bookworms.

11 thoughts on “Women, Art, and Empowerment – The Journey by Radhika Maira Tabrez”